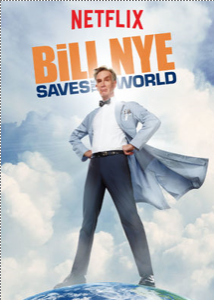 Save the world, Bill!
Advertisement:

Bill Nye Saves the World is a 2017 Netflix exclusive starring Bill Nye, of Bill Nye the Science Guy fame. In this series, Bill tackles controversial science-related topics that plague the world today, as well as ruthlessly debunking pseudo-scientific practices. Clearly targeted at those who grew up with his original Science Guy series, each episode plays out like a variety TV show, featuring skits, round-table discussions, experiments and on-location reports by a hand-picked team of correspondents. Celebrities occasionally appear on the show as well.

The first season premiered on April 21st, 2017, with 13 episodes. The show is available on Netflix worldwide.