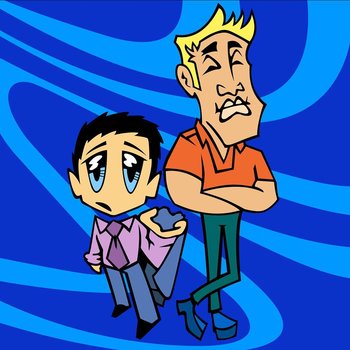 According to the band's mythology, the two were originally the last surviving soldiers for opposing armies during a great European war. During their final confrontation, a great heavenly light descended upon them and decreed that they must walk the earth in search of true love before zapping them into the late 90s. Immediately putting aside their differences, the duo began writing and recording music to document their oft-vain attempt to find the girls of their dreams, with Simon always on the receiving end of a breakup.

The actual story behind the band lies with a different duo, Jason Levine and James McCollum, formerly of the neo-soul group The Philosopher Kings. Despite not getting along, they both agreed that they did not like the direction in which the band was going. Their proposal for a more traditional pop sound came in the form of "Europa," which Levine sang in a broad English accent that he often did to amuse the rest of the band. The rest of the band turned it down, but liked it and suggested that the two of them strike out on their own, with Prozzäk being the result.

The act's first two albums, 1998's Hot Show and 2000's Saturday People, were very successful in Canada upon release, after which they had a huge Schedule Slip, save for the title song to the Disney Channel movie Get a Clue where they were credited as Simon & Milo. They eventually returned in 2005 with the Darker and Edgier Cruel Cruel World.

After recording one more song for the Canadian children's show "Roll Play," the duo went on hiatus. Levine began recording under the name Today Kid and McCollum returned to Philosopher Kings while also occasionally touring with Nelly Furtado's live band.

Prozzäk reunited in 2015 for the Atomic Lollipop festival, giving their first live performance since 2002 and debuting their first new song in ten years. A fourth album, Forever 1999, an a tour to promote it came two years later.

A farewell tour began in November of 2019.