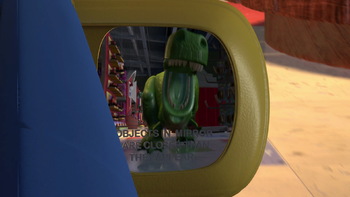 As the most enduringly popular blockbuster movie of the 1990s (only Titanic was a bigger box-office hit, and the animated features Beauty and the Beast, The Lion King, and Toy Story as lucratively beloved), Steven Spielberg's adaptation of Michael Crichton's novel has not only spawned a gigantic franchise toplined by four sequels — with a fifth due in The New '20s — but also a plethora of parodies and references in other works.

Having become a Stock Parody, Parody Episodes and Whole Plot References to Jurassic Park are listed at Jurassic Farce. Below are shorter-form takes relating to specific scenes, lines, characters, and the like.