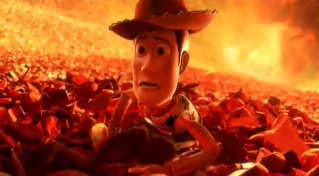 Watching your icons futilely struggle for their lives in the inferno... "Toys don't last forever," indeed.