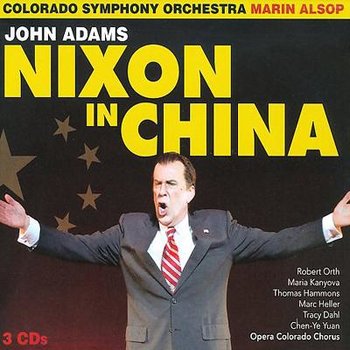 The People are the heroes now,
Behemoth pulls the peasants' plow.
When we look up, the fields are white,
The fields are white with harvest
In the morning light
And mountain ranges, one by one,
Rise red beneath the harvest moon.
The People's Liberation Army chorus, ''The People Are the Heroes Now

Nixon in China is an opera in three acts about Richard Nixon's state visit to China in 1972, by John Coolidge Adams. Premiering in 1987 (all the named characters in it except Mao and Chou En-lai were still alive but did not attend), it is well regarded but written in a very avant-garde style known as minimalism, so don't expect it to sound like Beethoven.

The whole thing starts off with an honor guard of Chinese troops singing revolutionary slogans at the airport as an airplane lands, and Nixon and Premier Chou En-lai greet each other. Nixon sings to himself about how awesome making history is. He and Chou, along with Henry Kissinger, go to meet Chairman Mao, who turns out to be more interested in talking about philosophy and making jokes than he is in discussing politics. He also has three secretaries who repeat everything he says while he is saying it. Afterward, there is a dinner with long speeches by Chou and Nixon and lots of toasts.

In Act II, Mrs. Nixon is shown the sites, mainly factories and hospitals, but they get around to the Forbidden Tombs. Her guides express a lot of sympathy with how hard it was for all the folks who had to work themselves to death on the old Imperial monuments. Then the Nixons and Kissinger are shown a ballet, The Red Detachement of Women, staged by Madame Mao. It's about an oppressed woman who joins the Communist brigades and plans to assassinate her former pimp. Unfortunately, Madame Mao was a harsh taskmaster, and starts yelling at the dancers, who proceed to screw up and get scolded even more. Mrs. Nixon and Kissinger both sing the presumed opinions of the dancers while the ballet still goes on: Kissinger the nasty characters and Pat the nice ones, respectively. Finally, Act III involves sitting around waiting for the airplane to bring the Americans back home while the main characters are remembering how great things were during the war, Chou En-lai being the only character who expresses any concern about the future and the results of the visit.