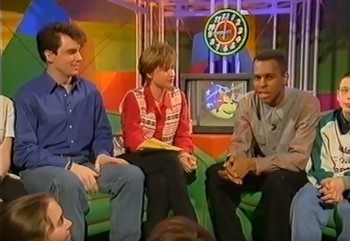 Begin the weekend's opening ceremony.
"Missed it? Missed out."

Indeed, Live & Kicking had the longest run of any Saturday morning show in the UK at an unprecedented eight years (or over 250 episodes; though this isn't counting the earlier and later episodes of Tiswas before that show went nationwide) between 1993 and 2001, so it's bound to be stored in the public consciousness a lot better than others.

Incarnation number four of the BBC's history of Saturday morning shows ran for the bulk of The '90s, hence why popular culture associates it with that decade. The format was give or take the same as that of Going Live! (even the name was a nod) - a "hot seat" which was a Q&A session for that week's guest(s), music performances, comedy sketches, games and all the others, just without that show's presenters. With a few tweaks, the show became so successful, it launched the careers of several of its major presenters (among them Zoe Ball, Jamie Theakston, Andi Peters and many others), many of which still have their careers properly live and kicking today, with the show itself effectively becoming the Trope Codifier for Saturday morning shows.

Tropes associated with Live & Kicking include: