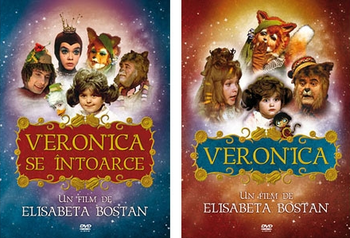 The Veronica Dilogy (comprised of Veronica and Veronica Returns) is a series of Romanian musical films released between 1972-1973 and directed by Elisabeta Bostan. The story follows Veronica, a charming and energetic little girl who lives in an orphanage somewhere in the mountains. On her fifth birthday, she receives a magic bag as a present from the Dandelion Fairy. With this magic bag, she can have all her wishes fulfilled - the only requirement is for Veronica to always behave well and share what she has with the other children.

Unfortunately, the other orphans become a little grabby with the magic bag and Veronica refuses to relinquish it, which prompts the magical object to leave her. Distraught, she chases after it into the nearby forest, and encounters a whole magical world of talking animals who want to help her find her magic bag... or use her to their advantage.

In the sequel, Veronica's pet duck is stolen by the Fox, and she ventures to the forest again in hopes of rescuing it. On her journey, she encounters old friends and makes new ones. The musicals are notable for using many motifs found in fables and fairy tales, and for their detailed and imaginative sets.

Tropified, the films provide examples of: