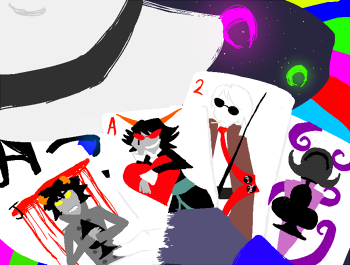 Cities in Dust is an Alternate Universe fic, in a Film Noir setting. Set in the corrupt, crime-ridden city of Newternia, where Derse agents, Prospit agents, and humans are all second-class citizens in a troll-dominated society. Dave Strider is a Hardboiled Detective, and one of the few human detectives in the city, who is forced to partner up with a highblood legislacerator. Continuity Nods and Mythology Gags abound, and the characterization is stunningly loyal.

And like the comic it was spun off from, it comes with its own soundtrack. The author frequently links to music to go with the scenes.