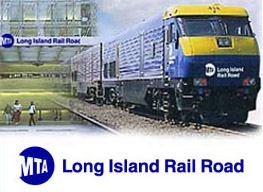 The Route of the Dashing Commuter.
Advertisement:

The Long Island Rail Road (also known as the LIRR) is a commuter railroad serving (as the name says) Long Island, New York. It is operated by the Metropolitan Transportation Authority (better known as the MTA), which you may know as the company that operates the New York City Subway. It wasn't always so; it was founded in 1834 as an independent company; as such, it became the bane of law students across America, as it got into quite a few notable lawsuits in the early 20th century—most notably Palsgraf v. Long Island Railroad Co.

, which every American law student reads and learns to hate and love for the complex beauty and beautiful complexity of Chief Judge Cardozo's opinion. Despite the changes in ownership, it has remained intact as a single unit with the same name ever since its founding—one of the few to have done so. It is also the only commuter rail system in the US to operate 24 hours a day, 7 days a week. Now that we have that out of the way, let's talk about the system itself.

Other stations of note: