Film / Property of the Republic 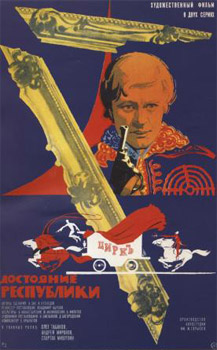 The Soviet cinematic poster
Property of the Republic (Dostoyanie respubliki, Достояние республики) is a 1971 Soviet detective-adventure film set during the time of civil war in Russia and starring a pleiad of famous Russian actors led by Oleg Tabakov and Andrei Mironov.
Advertisement:

In 1918, after the Great October Revolution, the collection of precious art objects that belonged to the Prince Tikhvinsky’s family and was to be passed to the government, is stolen. A young detective Makar Ovchinnikov (played by Oleg Tabakov

) is charged with the job of finding it. Makar discovers that the treasure has been stolen by the former Tikhvinsky’s steward Tarakanov. Meanwhile, Tarakanov turns to a former fencing teacher of the Tikhvinskys’ family, an adventurer nicknamed Marquis (played by Andrei Mironov

), who had once helped the Prince’s family to flee from the Revolution, to assist him in conveying the collection abroad. Marquis befriends a street urchin Keshka, and they hide themselves and the collection among the members of an itinerant circus troupe, where Marquis demonstrates his Improbable Aiming Skills with a revolver. Makar joins the troupe incognito, but then the protagonists are caught in-between the rock and the hard place when the gang of bandits led by Lagutin gets their hands on both them and the Tikhvinsky’s treasure…

The film has gorgeous visuals (including combined animated sequences by Yuri Norstein), music by Yevgeny Krylatov, and some nicely staged action scenes. It was a big hit in the USSR in the 1970s, and Andrei Mironov named the role of Marquis his favorite among all the roles he played.