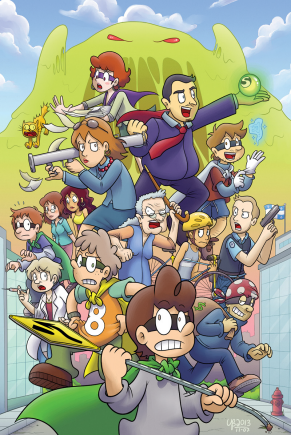 is a superhero webcomic by Yves Bourgelas.

The story centers on a young man named Oliver DaCosta, who's mother and he just recently moved into the town of Norandopolis. However just as they're moving into their house, a superhero crashes into Oliver's room and winds up fleeing the scene. As he does, the hero drops an orb on the ground. When Oliver picks it up, it's recalled back to a group of heroes heroes fighting a monster, revealing to Oliver the existence of superheroes and leading him to accidentally save the day. After which, he finds out that the superheroes are part of an organization of the city called Superhumans Inc. who manufactures said orbs, called Powerspheres, sells them to the youths of the city and employs them as part time heroes. Oliver naturally jumps on board to be a superhero and is given the name Supercrash. Hilary soon ensues as Oliver learns the ups and down of being a crime fighter.