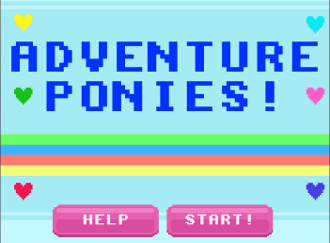 Adventure Ponies! is a flash Platform Game based on My Little Pony: Friendship Is Magic, made by The Hub, and originally playable on their website. Currently it is available for playing here

The player can control any of the mane cast of the show as they make their way through the levels and take on various antagonists from the series, 8-bit style.

Now has a sequel in the form of Adventure Ponies 2: Wait! There's More!?