Literature / Jeeves in the Offing 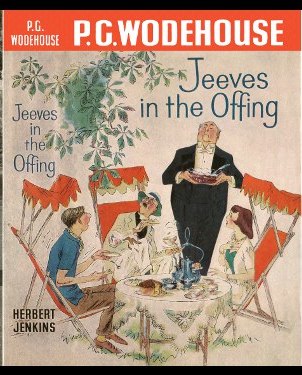 Jeeves in the Offing (published in America as How Right You Are, Jeeves) is a 1960 novel by P. G. Wodehouse.

It is a Jeeves and Wooster story. Jeeves is going off on vacation, so Bertie is particularly pleased to get an invitation to stay with his Aunt Dahlia. As usual, Dahlia has a job for him. It seems that Dahlia's gorgeous but dim-witted goddaughter Phyllis Mills is staying at Brinkley Court. Also staying at Brinkley Court are Adela Cream and her son Willie, guests at the mansion while Adela's husband Homer is off making a big business deal with Dahlia's husband Thomas. This is a problem, because Willie Cream is a thrice-married, well-known rake and libertine—and he's been paying way too much attention to Phyllis. Aunt Dahlia has summoned Bertie to Brinkley to keep an eye out on Willie Cream and make sure he doesn't get too far with Phyllis. Bertie is less than pleased about this, because along with Phyllis came her stepfather, the Rev. Aubrey Upjohn. Upjohn was once the tyrannical, Dean Bitterman headmaster of the boarding school where young Bertie was educated, and Bertie fears him still.note Although Rev. Upjohn was mentioned several times in the Jeeves and Wooster canon when Bertie remembers his school days, this is the only time he ever appeared in a story.

Also staying at Brinkley Court is Bertie's old girlfriend and one-time fiancée, Bobbie Wickham. Bertie's mortal fear of marriage and Bobbie's high-spirited, mischievous Fiery Redhead nature make him nervous. Bertie is even more horrified when he sees an announcement in the newspaper that Roberta "Bobbie" Wickham has gotten engaged to one Bertram Wooster.