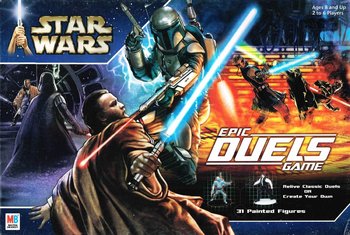 "Relive classic duels or create your own"
Advertisement:

Star Wars : Epic Duels is a tabletop game for 2 to 6 players that was published by Hasbro in 2002, in coincidence with the release of Attack of the Clones. It is a miniatures and deck-based tactical game in which players control various characters from the two first Star Wars trilogies (minus Episode III, which would not come out before three more years) in duels that disregard continuity for the sake of Ultimate Showdown of Ultimate Destiny. Despite not being ever re-released, it was successful enough among its players that up to nowadays, fans have kept creating new decks for additional characters (or alternative decks for existing ones), new maps, and making up more and more bizarre confrontations.

The goal for each team is to eliminate every "Major character" on the other side by depleting their Hit Points count. Every main character comes with a unique deck of cards and one or two "minor characters" who have their separate HP track. A minor may be destroyed with limited consequences, and a player may keep acting as long as they have at least one character alive and their side still has at least one major.

Characters get a turn alternating between teams (not necessarily heroes against villains), to prevent Zerg Rush. A turn goes as follows : The player rolls a die which indicates how many of their miniatures (one or all) may move this turn, and up to how many spaces ; moves accordingly on the game board (orthogonally, but not diagonally) ; then gets two actions note that is, either drawing a card, playing a card, or discarding one to regenerate Hit Points.Cards may be used for attacking, defending, or special effects. When a character attacks another with a card, the attack value is at first kept secret : only the attacker and the target are known. The defending player may then select one of their cards for defense and reveal it (or chose not to defend), and the attack card is revealed : if the value is greater than the opponent's defense, the difference is dealt in damage to the defender. Then, any side-effect the cards may have are applied, and the action is over.

The game draws its strength from its asymmetric yet balanced gameplay : every character has a unique gameplay and set of abilities, yet there is supposedly no completely overpowered characternote  Statistics over multiple games seem to indicate that characters from the original edition aren't perfectly balanced, so tweaked decks were made by fans to correct it. As such, every game can feel different as players will have to adapt their character's playstyle to the situation ; and given the amount of alternative decks, there is virtually no limit to the possible combinations, balance problems notwithstanding.

The base game includes six main characters for each side, 31 plastic miniatures, and four different maps from 3 different movies. Tropes concerning specific characters are best kept to the characters page.More complete information can be found on the wiki

, as well as on Geektopia Games

. These two sites appear to be the main nexuses about the game that are still active today, along side a discord server.