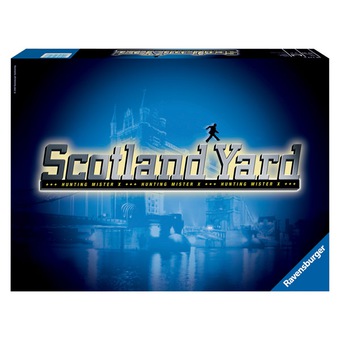 Scotland Yard is a British board game that won the coveted Spiel des Jahres (German "Game of the Year") award in 1983. In it, up to six players take control of police officers tracking a criminal through the streets and underground of London, while a seventh player controls the aforementioned criminal, Mister X, in his attempts to evade capture.

Game play takes place primarily on the game board, which includes a map of London marked with taxi, bus, and underground routes. At the beginning of the game, each police officer is given an allotment of tickets with which to travel said routes - taxis for short point-to-point distances, undergrounds to travel across the city, and buses for the distances in-between. Then, each character draws a starting position at random, and everyone but Mr. X places their pieces on the board.

As he moves through the map, Mr. X's position is recorded on a piece of paper (to keep the player honest), but only revealed on certain turns. In addition, Mr. X's player must reveal which ticket he uses each turn, giving the police players clues to track the fugitive down. If Mr. X can avoid capture until the police run out of tickets (which takes about 22 turns), he wins the game.

Fantasy Flight Games has the expy 'Letters From Whitechapel'; instead of Mister X, the police detectives are chasing the player Jack the Ripper who kills one of the prostitute 'targets' and get back to his lair by dawn. The longer the Jack player waits to strike, the more information he gets on police patrols, but the less time he has to get back home.