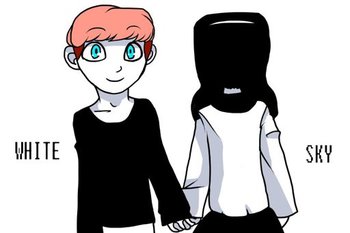 White Sky is a rather odd, brief psychological horror game made with RPG Maker VX Ace in 2015 by "R_C Heal". The game follows a young schoolgirl called Blanca, or White, as she lives her everyday, monotonous life of getting up, heading for school and back home to do her homework and sleep, only to repeat this cycle the next day.

With her world being a literal one of black and white, people are heavily coaxed into leading a regular life and being upstanding citizens. Blanca hates the world she lives in.

That is, until a bright, pink house in her neighborhood catches her attention. As the only thing in this monochrome world made of actual color, Blanca becomes curious and enters it. There, she meets another colorful child by the name of Toby...