From the original manga 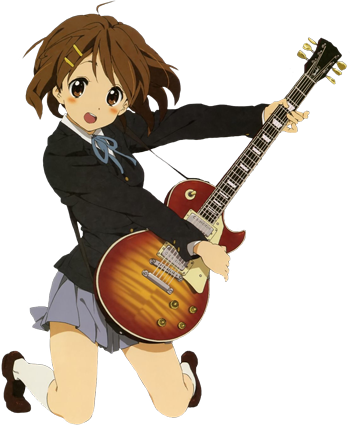 Yui is the first character introduced, and remains the primary viewpoint character throughout the series. She is the lead guitarist and main vocalist of the band. Yui is a kind-hearted but air-headed girl who initially only joined the club because she was tempted by the offer of snacks. She initially had no musical experience whatsoever and has difficulties maintaining her attention, but shows herself to be a fast study when focused, and discovers surprising talents she herself was unaware of (such as having perfect pitch 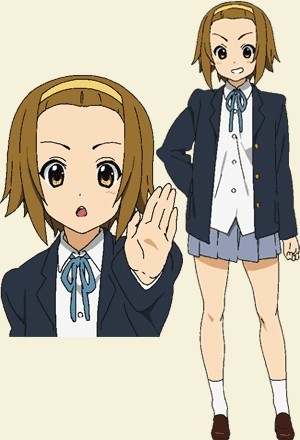 Club president and drummer who has problems following her responsibilities. A rowdy and loud girl, she's been friends with Mio since they were little. Her interest in the club was primarily because, being a vacant club, she could elevate herself to president without having to be elected. While not as disorganized as Yui, she often misses deadlines or important details because she's too distracted by something else, which often leads to her and Yui being the club's troublemakers for one reason or another.

The extremely shy bassist and backup vocalist whenever Yui can't sing. Ritsu's friend since childhood, her shyness and being easily spooked makes her a prime target for Ritsu's playful prodding, much to her annoyance. Otherwise she's a very organized and mature girl who has to keep the rest of the club on-task when they start drifting into their less serious tendencies. 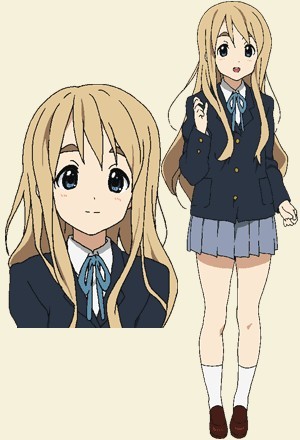 The soft-spoken keyboardist who frequently provides tea and sweets in the middle of band practice. Hailing from a very wealthy family with a large business empire, she takes great delight in the more mundane aspects of middle-class life, being so separated from it normally. Extremely kind, she's always willing to use the resources she's been blessed with to help the club. 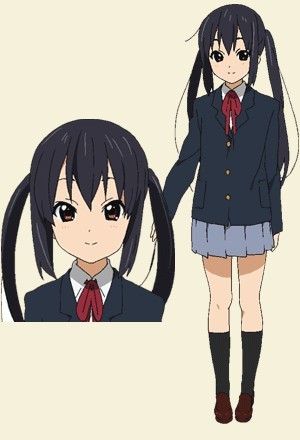 The Light Music Club's first new member after Yui, who joins in her freshman year (with the rest in their second year). She's also the secondary guitarist. Originally starting out as a very firm and demanding member, not tolerating the club's lackidasical attitude, their propensity for social eating and slacking off eventually rub off onto her and she eases up. Still, she's a committed musician, being born and bred to musically inclined parents, and often becomes the one who needs to keep the club on task besides Mio. 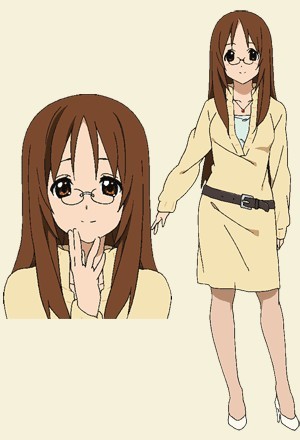 The Wind Instruments Club advisor, who was eventually blackmailed by Ritsu into also becoming the Light Music Club teacher on threat of exposing her past as a death metal rocker in a previous incarnation of the club. Normally tries to appear as a mature and collected teacher but she ends up breaking her facade around the club and takes great delight in playfully using the members as canvasses for her costume designs. Beyond that she is lonely and often dumps her lack of a love life on the other club members when she's feeling particularly down. 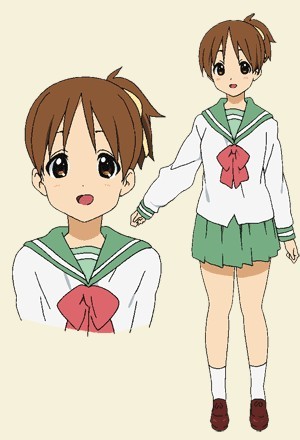 Yui's more responsible younger sister. Whereas Yui is flighty and lives with her head in the clouds, Ui takes care of the house and manages her sister on top of it. She is also highly adept herself, being able to grasp things even faster than Yui and with a better understanding of the underlying principles, no less. She and Yui share a very tight bond, despite their rather polar opposite personalities, and Ui is almost dependent on having to dote on her sister.

Azusa and Ui's friend and classmate, as well as a member of the Jazz Club. Often laments not being able to join in the fun of the club but eventually gets a shot at being a member during her senior year. 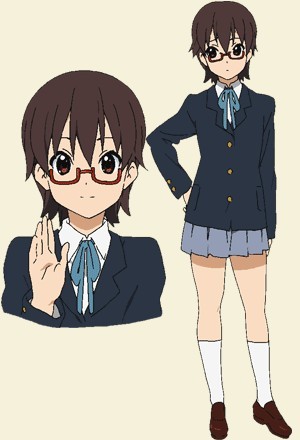 Yui's friend and classmate before she joined the band. A highly organized and responsible girl, she becomes a major player in the student council, going on to be its president in its senior year. Generally regarded as Yui's minder by the other members of the club she's also often on Ritsu's case for frequent missed deadlines concerning the club.

From the reboot manga

Another freshman who becomes the fifth member of Azusa's new Light Music Club. After several attempts to get a role in the "New Leaf Girls" band, she becomes the producer and songwriter.
Characters from College

Yui, Ritsu, Mio, Mugi and Megumi's dorm-mate, leader of three-girl band "OnNaGumi" with fellow dorm-mates Sachi and Ayame during their High School days, and a new member of the university Light Music Club. Like Yui, she's majoring in education and is the guitarist.

A member of the OnNaGumi with Akira and Ayame (and eventually of the university Light Music Club), as well as dorm-mate of Yui, Ritsu, Mio, Mugi and Megumi. She's in the same department as Mio and is like her the bassist.

The third OnNaGumi member who, along with Akira and Sachi, joins the university Light Music Club. She's also dorm-mates with Yui, Ritsu, Mio, Mugi and Megumi. She's also in the same department as Ritsu and is like her the drummer.

The current club president of the University Light Music Club.
Characters from Shuffle

A club at a different school from Sakuragaoka. 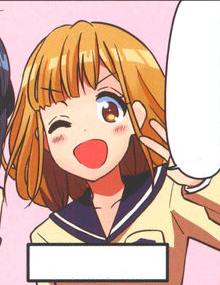 The Protagonist of K-On! Shuffle, Yukari is an enthusiastic girl who decides to pick up drumming after seeing Hokago Tea Time play at their school festival. 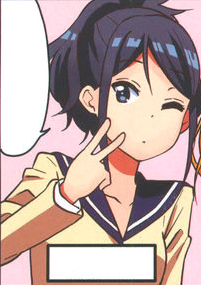 Yukari's friend from middle school. Like Yukari, she expresses an interest in joining a music club and becomes the bassist of the band. 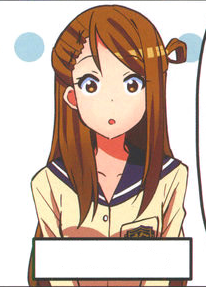 A classmate of Yukari and Kaede, who gets roped into joining the Light Music Appreciation Society by them. Eventually becomes the guitarist of the band.

The only member left of the previous generations of the Light Music Appreciation Society.