A character sheet for the heroes and villains of The Wonderful 101 Be aware of spoilers, both marked and unmarked.

After an alien invasion 40 years prior to the events of the game, the United Nations created, in secret, a planetary defense force to protect the Earth from further incursion. The CENTINELS utilize powerful technology and powerful combat agents to keep the planet safe.

The main force of the CENTINELS, the Wonderful 100 (read as "one-double-oh") are a team of 100 special combat agents recruited from 100 cities across the globe. After going through intense training and being certified as physically and mentally able, an agent is given a Wonder Pendant and designated as a Wonderful One, able to don a powerful CENTINEL Suit and make use of pseudo-digital particle manipulation in order to properly fight against alien invaders. Each member of the team hides their heroism, with their identities considered highly classified.

Their faces are forever masked. Their tombs are forever unknown. They are the 100 most wonderful defenders of our world. They are... the Wonderful 100.

Tropes common to all Wonderful Ones 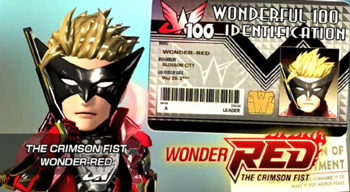 Will Wedgewood, also known as Wonder-Red, is the newest member of the Wonderful 100. Despite having joined the team only a month ago, Wonder-Red has been placed into the role of the leader, due to the GEATHJERK attacking his assigned city. Wonder-Red is serious and focused almost to a fault, and has a lot of respect (and trivia knowledge) for every Wonderful One he comes across.

Wonder-Red's weapon of choice is the pair of Vulcan Knuckles on his arms, which amplify his punches with machine-like speed and accuracy. He is the member of the team most proficient with the Unite Hand morph. 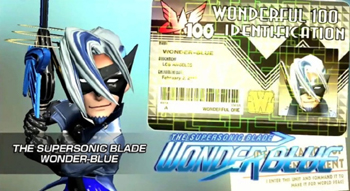 A master of the sword, Wonder Blue is one of the Wonderful 100's most powerful combat agents. A bit of a show-off, albeit not very good at showing off. He takes issue with Red being appointed the leader of the current operation, despite his novice status. 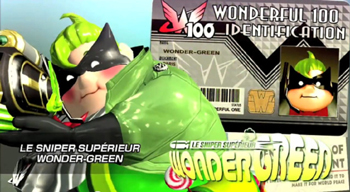 An extremely young member of the Wonderful 100, Wonder-Green was recruited for his amazing skill with a gun, despite his youth. Wonder-Green is the wielder of the Unite Gun power, which uses heroes as ammunition.

Wonder-Green comes from a rather strict family, and takes advantage of the anonymity of his hero identity to indulge in everything his parents normally forbid him. In addition to being able to insult his foes, he indulges in junk food, and can be found munching on something new every operation. 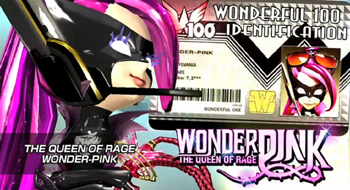 The Queen of Rage: Wonder-Pink

A teenage member of the Wonderful 100. Wonder Pink is a high school student and talented gymnast who is the master of the Unite Whip power, which can tear away spiked armor and throw enemies.

Wonder Pink seems to value appearances above the actual mission, which has a tendency to distract her focus from the matter at hand. Despite that, her actual abilities have led the team to countless victories. 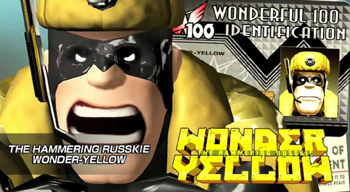 A powerful Wonderful One from Russia. Wonder Yellow is the master of the heavy-hitting Unite Hammer.

Wonder Yellow is extremely shy, and has a tendency to blush and fumble his words. 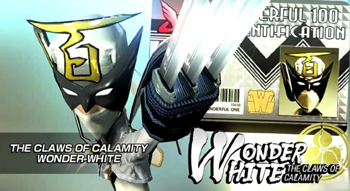 The Claws of Calamity: Wonder-White

A Wonderful One from Japan, and master of ninjutsu. Wonder-White wields a pair of deadly claws, which are the basis of the chilling Unite Claw power.

Wonder White is a serious man, prone to proverbs. 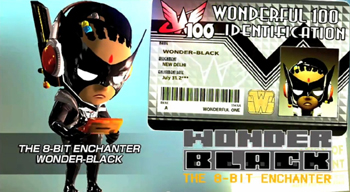 A Wonderful One assigned to India, with a great amount of technological prowess. He is the user of the mysterious Unite Bomb ability.

Wonder-Black is very introverted, always seen with headphones and a game system. Almost never speaking, he seems to prefer actions to words.

Other Wonderful Ones
The color-named heroes may be the main focus characters, but there are one hundred unique heroes among the Wonderful 100, each with their own names, assignments, and weapons of choice.

Other members of CENTINEL

The Wonderful 100 may be CENTINEL's strongest fighting force, but there are plenty of other agents of CENTINEL out to support the Wonderful 100 in their quest to repel alien invasion.
Laurence Nelson/Pompadour Paragon: Wonder-Red (Emeritus)/Wonder-Captain 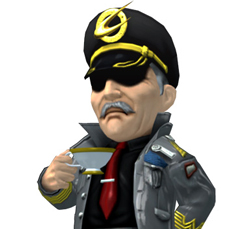 Commander of CENTINEL, pilot of the Virgin Victory, and dispatcher of the Wonderful 100. 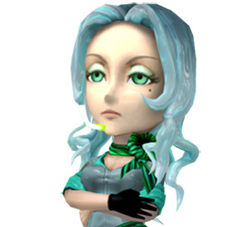 Operator of the Virgin Victory; the Wonderful 100's spaceship.

A flying robot buddy that gives information to the Wonderful 100 in the field.

Research professor for the CENTINELS.

A former CENTINEL scientist who worked on the Hyper Plasma Shield protecting Earth. She was killed during an accident in the shield's production, prompting CENTINEL to code-name it after her in her honor. It is later revealed that she didn't actually die, instead she directly uploaded her consciousness into CENTINEL's neural network. She is also Luka's mother.

In General
A mysterious alien race who has invaded the Earth twice in the past. They take advantage of a spacial event that happens every 20 years to mount invasions of increasing size. They have been repelled twice, but have now invaded Earth with the largest force they've ever sent, with the Wonderful 100 as their only major obstacle. They actually come from 1,500 years in the future, where their civilization has been all but destroyed by an empire originating from Earth and seek to change the course of history in their favor.

A huge, gorilla-like member of GEATHJERK's invading force, and ranked sixth in its hierarchy of officers. He has tamed the three-headed dragon Ohrowchee, which he rides into battle with.

A tiny, fly-like member of GEATHJERK's forces, who flies around in a pitcher-shaped vehicle.

A tall, blue humanoid member of GEATHJERK's forces, who rides on a star-shaped flying platform. She specializes in underwater operations.

Laambo's brother. Even more brutal and dangerous, he pilots a specially customized version of the Gah-Goojin mech.

GEATHJERK's second-ranked officer, a skilled assassin and wielder of ice powers. Killed by Vorkken before the heroes ever see him.

The commander of all the GEATHJERK. He is also the control reactor for their ultimate weapon, the floating fortress GEATH-Waksay.

A galaxy-roaming band of space pirates. They have a similar power to Unite Morph, known as "Unify Morph".

"I will allow you to refer to me as Prince Vorkken."

The heir to the throne of the roaming comet Rhullo, and leader of the Guyzoch space pirates.

A stalwart soldier of Prince Vorkken’s Guyzoch Space Pirates. As commanding first officer, Chewgi is always beside Vorkken as his right hand. He is the most powerful member of the pirates in terms of brute force, but is of a quiet nature and rarely speaks. Chewgi firmly believes that even the battlefield is a place for proper manners, respecting the power of opponents and always fighting fairly. Chewgi is the master of a unique Unify Morph attack; the Unify Naginata.

A robot that is always by Vorkken's side. V-star provides Vorkken with information, and stores in his memory the data for the constructs created by the Unify Morph power.

A student at Blossom Elementary school. Luka is a problem child; a bully, among other things. Luka's parents were both killed in a previous alien attack. Since then, Luka has harbored a deep hatred for alien invaders, but also hates the Wonderful 100, who were unable to save his parents. He is the son of Professor Margarita, who he believes died in an accident that CENTINELS allowed to happen; as an act of revenge, he betrays the Wonderful Ones and temporarily allies himself with GEATHJERK, only to repent after learning the truth about his mother's death.

She appears in front of the Wonderful One-Double-Oh from time to time, only to taunt them when she does. She doesn’t seem to belong to the GEATHJERK army, but she can hardly be called an ally either. Despite possessing high combat capabilities, she never engages in combat of her own accord and she tends to disappear as soon as she arrives. Her objectives are as shrouded in mystery as her identity. She is actually a member of the Galactic Federation Police, and Vorkken's sister. However, she is the last surviving member, as well as being one of the few survivors of the destruction of Rhullo along with Vorkken. She currently chases both the GEATHJERK and the Guyzoch. She can use Unite Bowgun, which has the ability to charm enemies.

An officer in the GDA (Gaia Defense Army), and the father of Wonder-Red. He was killed in the Second Earth Defense War twenty years ago, performing a Heroic Sacrifice after being mortally wounded, managing to end the war.

The mysterious force who is acknowledged by GEATHJERK during their invasion of Earth. They are The Wonderful 100 of the future, having conquered the homeworlds of GEATHJERK's members and making them travel back in time to prevent their existence by wiping out humanity.