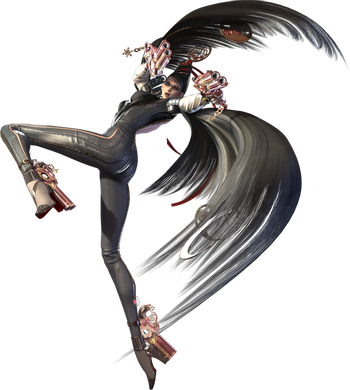 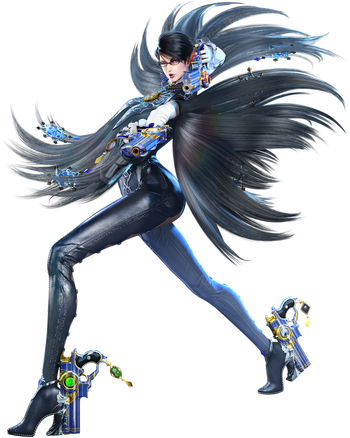 The main character of the series. Bayonetta is one of the Umbra Witches, a magical European clan that existed hundreds of years ago to protect the world's sacred darkness. However, she was born at the center of conflict – her parents were an Umbra Witch, Rosa, and a Lumen Sage named Balder, and their union led to the destruction of both of their clans. In the midst of the Witch Hunts that put her life in danger, Bayonetta was sealed away without her memories for five hundred years. Her awakening and resultant desire to remember her identity starts the events of Bayonetta.

Like other witches, Bayonetta's powers are the result of a contract with a demon of Inferno, hers being Madama Butterfly, and her skills in combat are a mixture of magical gunplay and martial arts. Contrary to her bloody origin and training, though, Bayonetta is an outrageously carefree person who handles the angels sent after her with a mixture of playful sadism, camp, and sheer joy, all while remaining untouched by the carnage and ruin around her. While initially aloof to her allies and acquaintances, Bayonetta eventually warms up to them and displays fierce loyalty and protectiveness even in the worst of circumstances. Bayonetta also has an extremely soft spot for children, and will often provide care and support to her "little ones" in the midst of her quests. 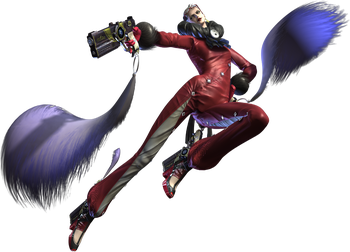 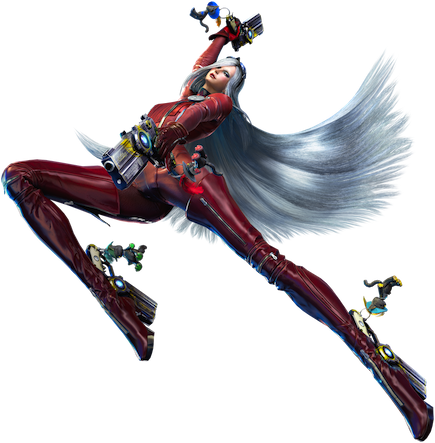 "I stake my honour as an Umbra!"
Voiced by: Grey DeLisle (EN), Mie Sonozaki (JP)

Jeanne is a major antagonist in Bayonetta and a major protagonist in Bayonetta 2. An Umbra Witch of prodigious skill, Jeanne was Bayonetta's childhood friend and her frequent sparring partner, despite Bayonetta's stigma as an impure outsider and Jeanne's status as heir to the clan. When the Witch Hunts threatened the safety of her clan, Jeanne sealed Bayonetta away and spent the next five hundred years fighting the forces of Paradiso as the last of her kind.

She is Bayonetta's equal in battle, and similarly fights with four magical pistols, martial arts, and the limbs of a demoness, Madama Styx. However, Jeanne is much more serious and proud, holding her status as an Umbra Witch in high regard, and she often concerns herself with the supernatural workings of her world even when no one else does. She regards combat as a fierce, no-nonsense proving ground for skill, and is merciless to her opponents. However, she shows an emotional side sometimes, often being shocked at displays of friendship; she's also a daredevil who thoroughly enjoys performing dangerous stunts on her motorcycle.
Luka Redgrave 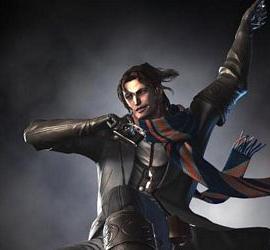 "Sure, my colleagues laugh at me for chasing fairy tales... amongst other things..."
Voiced by: Yuri Lowenthal (EN), Daisuke Namikawa (JP, anime)

Luka is a significant supporting character in the series, being an antagonist of sorts in Bayonetta while being firmly on Bayonetta's side in the sequel. Like his father Antonio, Luka is an intrepid journalist dedicated to uncovering the truth, and also puts his talents to use in uncovering the mysteries of Vigrid's Lumen Sages and Umbra Witches. His interest in the subject began when his father – who was also investigating the clans – suffered a strange death; Luka's subsequent investigations eventually led to him encountering Bayonetta twenty years later.

As a normal human, Luka has no special powers, but he's often forced to keep up with everyone else anyway. His investigative instincts, coupled with a clever grappling-hook device, often get him into places and trouble that a regular person wouldn't normally be near, and he has a knack for uncovering local legends that play a vital role in the plot. When not doing his research, Luka usually provides comic relief through his theatricality and his shameless flirting with any pretty woman he meets – both of which make him a frequent target for Bayonetta's teasing.
Rodin

"You got halos. I got items. Welcome to the foundation of a barter economy."
Voiced by: Dave Fennoy (EN), Tessho Genda (JP, anime)

Rodin is Bayonetta's armorer, and the bartender and owner of the Gates of Hell in his spare time. Menacing and dangerous, his weapons are powered by the souls of demons he personally beats into submission, but he prefers to watch Bayonetta put his "works of art" to use instead of getting directly involved in the games' storylines. Despite his bloody place in the cast, Rodin's shown a softer, more affable side on occasion, and cheerfully greets the player with cheesy jokes and pop-culture references whenever they visit his shop.

Rodin is also a fallen angel whose power used to be on par with that of Jubileus. Players can purchase the Platinum Ticket for 9,999,999 halos to restore his power and face him as the game's bonus boss; in Bayonetta, he manifests as Father Rodin, while in Bayonetta 2, he fights as the demon Rodin – both of which bear the Boss Subtitles of The Infinite One.
Enzo 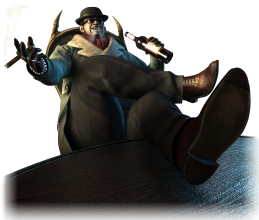 "You have any idea how much this is going to cost to fix? How the fuck do I always get wrapped up in this shit?!"
Voiced by: Chick Vennera (EN. Bayonetta), John Kassir (EN, Bayonetta 2), Wataru Takagi (JP)

A mobster who operates in the city Bayonetta calls home. Like Luka, Enzo's primary role in the series is to provide Bayonetta with information. However, Enzo's information usually springs from underworld connections and takes the form of tips that put Bayonetta in the right place to track down what she's looking for. Enzo's "business" doesn't put him in a position to help out during the main storyline, so his appearances in the Bayonetta series are at the beginning and end of the game.

Enzo might be a feared, tough mobster in his day job, but in Bayonetta's world, he's a fish out of water. He (and his car) want nothing to do with the scenery-chewing angel fights that Bayonetta attracts, and heroes and villains alike seem to make a point of making his screentime miserable and humiliating. Still, Enzo seems to care about both of his "families", as much of his motivation for staying out of Bayonetta's business is so that he can come home to his beloved wife and children in one piece.