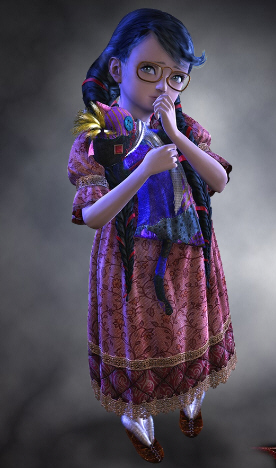 "Mummy is a witch, and witches protect people and are very strong. When I grow up, I'll be strong too and I'll protect my mummy!"
Voiced by: Joy Jillian (EN), Miyuki Sawashiro (JP, anime)

A supporting character in Bayonetta. Cereza is a young girl that Bayonetta finds wandering in the ruins of the Umbran Proving Grounds, lost, terrified, and hunted by angels. She's rescued by Bayonetta, whom she immediately grows attached to and mistakes for her "mummy", much to the witch's chagrin. As the story progresses, however, Cereza becomes more brave and confident through imitating Bayonetta, and she drives a significant mystery relating to her being the "key to Bayonetta's future."
Advertisement:
Loki, the Sovereign One 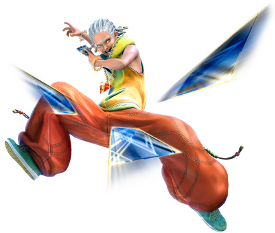 A mysterious youth who acts as Bayonetta's Kid Sidekick during the second game. He aims to climb Fimbulventr, but has no idea why.
Rosa 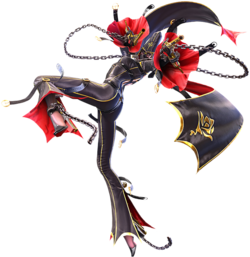 "As long as there is light, the shadow remains cast."
Voiced by: Hellena Taylor (EN), Atsuko Tanaka (JP)

Rosa was an Umbra Witch and Bayonetta's mother. She conceived Bayonetta when she fell in love with a Lumen Sage called Balder. When Bayonetta was born, Rosa and Balder were punished greatly by their respective clans. This was because a child born of darkness and light would ultimately undo the age-old pact between the overseers. Rosa was imprisoned for the rest of her life.
Umbran Elder 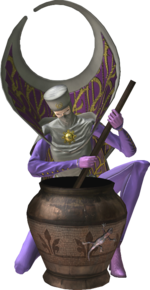 "In your wickedness, you have broken the ancient commandments and crafted a bond with one of the light. Our laws are clear. They demand you be eternally imprisoned. As for the impure child, she must be kept from the path of the dark arts forever!"
Voiced by: Jenny O'Hara (EN), Reiko Suzuki (JP)

At the beginning of the game, the Umbran Elder lectures Rosa and Balder about their law-breaking. Possibly Jeanne's mother.
Antonio Redgrave 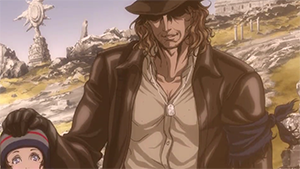 "They say that some things come at the cost of your life, but to me, truth IS my life. In this age filled with lies and deception, I forever pray that truth will shine its light on the path of righteousness."
– Antonio, A Voyage Towards The Truth
Voiced by: George Ball (EN), Yasushi Miyabayashi (Bloody Fate)

Luka's father and a renowned journalist and investigator. Twenty years before the events of Bayonetta, Antonio investigated the city of Vigrid and the Ithavoll group in search of the truth behind their holy façades, meticulously documenting everything he uncovered in a battered notebook. Antonio is never interacted with in Bayonetta's present-day storyline, but the actions he took in the past would eventually shape much of Bayonetta's journey to remember her identity.

The notes taken by Antonio are scattered around Vigrid, and can be recovered piece by piece over the course of the game's adventure chapters.
Rodin's weapons

"You know I'm all 'bout them Angelic Hymns Gold LPs. Angels in agony are pretty much my slow jams. I play that back home, and the demons will be lined up to get down. Lucky for me, I got a few jams of my own cookin' that'll need a little demon kick to finish them off."
–Rodin

Outside of the pistol quartets she uses from the start of the games, Bayonetta can optionally fight with weapons provided by Rodin in exchange for special LPs found during the games' adventure levels. While not characters in the traditional sense, the specific demons Rodin uses to power his creations have backstories of their own, and continue to have personalities and styles even after being sealed.