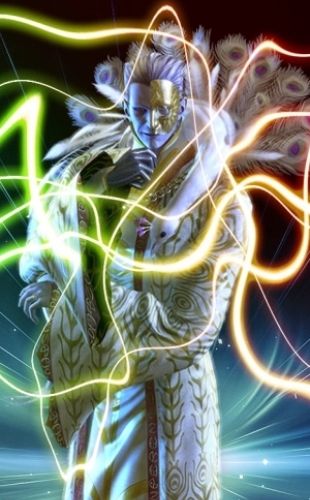 "Rise, my child! Rise to realize your true potential! Unleash your power and awaken the Eyes of the World!"
- Balder
Voiced by: Grant Albrecht (EN), Norio Wakamoto (JP)

The mysterious CEO of the Ithavoll Group, who is eventually revealed as both the Big Bad and as Bayonetta's father. His past version is in the sequel (see Masked Lumen). 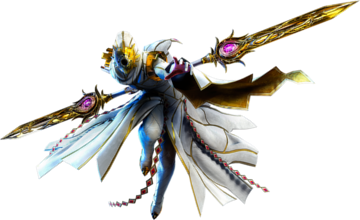 "Very well then, Bayonetta: you shall be the first Umbra Witch to die at my hands!"
- The Masked Lumen
Voiced by: Crispin Freeman (EN), Takehito Koyasu (JP)

A mysterious Lumen Sage that appears as an antagonist in the second game. Not much is known about him other than his grudge against Loki, and, by extension, Bayonetta, whom he clashes with several times as she tries to defend the boy. He was brought forth by Aesir.
Angels of Paradiso

Spiritual beings from the celestial world of Paradiso and the primary antagonists and enemies of the series. They were allied with the Lumen Sages. 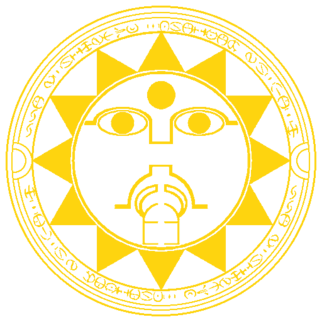 Hierarchy of Laguna's Symbol
Angels that are the soldiers of Paradiso that Bayonetta hunts, collectively known as "Laguna" and are worshiped by the people of Vigrid.

Dea Halo
Highest-ranking and most powerful angel of the Hierarchy of Laguna.
Jubileus 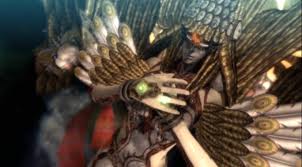 Dea of the Hierarchy of Laguna, creator of the the world, the ruler of Paradiso, and the embodiment of the Divine Will. The Angels of Paradiso seek to revive her in the first game in order to reunite the Trinity of Realities, which would result in the complete destruction of the world. 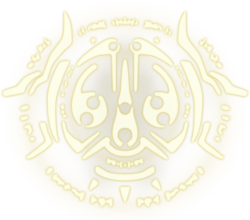 Also known as The Cardinal Virtues, they make up the second highest-ranking and most powerful angels of the Hierarchy of Laguna, are the embodiments of the Cardinal Virtues and serve as Paradiso's generals and effectual leaders in Jubileus's absence. Their main objective is to bring their beloved creator back at any cost, and aren't above making use of their nature-bending powers to do so.Tropes common to all four of the Auditio:
Fortitudo

Fortitudo, the Cardinal Virtue of Fortitude 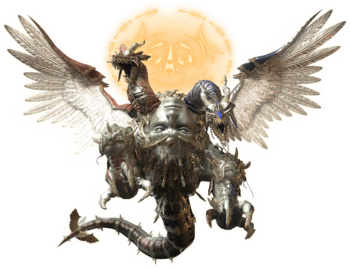 "The taint of the dark world is upon you. Yet you have made but a pact with the darkness in exchange for the powers of a witch. It was said that one such pitiful creature survived the annihilation. Tell me, my child. What is your name?"
- Fortitudo
Voiced by: George Ball

The first of the Audito, representing the viture of Courage and Fortitude, as well as the element of Fire. A massive, two-headed, dragon-like creature, he played a large role in the Witch Hunts, and therefore is a key part of Bayonetta's lost memories. She encounters him the most during her journey.

According to the Hierarchy of Laguna, his terrifying appearance is meant to inspire courage in those that see it.
Temperantia

Temperantia, the Cardinal Virtue of Temperance 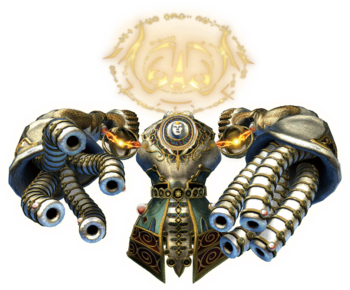 "Ahh, the lovely Bayonetta. Such beautiful eyes... Despite the passing of time, you still hold the pride of an overseer, don't you?"
- Temperantia
Voiced by: Yuri Lowenthal

The second of the Audito, Temperantia embodies the Cardinal Virtue of Temperance as well as the element of Air. He is a massive, castle-like giant with giant arms that look like gun turrets. He uses his power over wind to antagonize Bayonetta throughout her trek through Vigrid until he is defeated.

According to the Hierarchy of Laguna, Temperantia appears in the world as a mighty storm, meant to inspire temperance on the part of the faithful as they beg for the wind to spare their lives.
Iustitia

Iustitia, the Cardinal Virtue of Justice 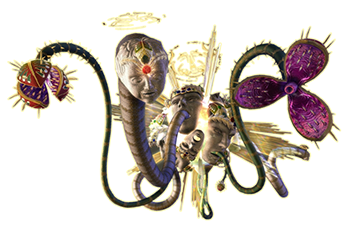 "It was as the Lumen Sage foretold. Your power is indeed magnificent."
- Iustitia
Voiced by: Grant Albrecht

The third of the Audito, Iustitia represents the Cardinal Virtue of Justice and the Element of Earth. It appears as an indecipherable mass of vaguely plant-like, demonic-looking tentacles, which serve to hinder Bayonetta's progress until she finally confronts their source.

According to the Hierarchy of Laguna, Iustitia's appearance is not fixed, and it changes with principles of justice established by mankind. Because of the ambiguous nature of justice, Iustitia is said to be the closest of Audito to Inferno.note Ironic considering that Justice was classically considered to be the second highest of the virtues, second only to prudence.
Sapientia

Sapientia, the Cardinal Virtue of Prudence 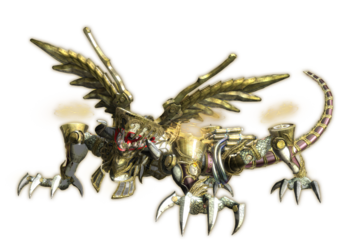 "Stone...? ...You think this is all about some worthless rock? [laughs] May Jubileus, the Creator, grace you! [laughs]"
- Sapientia
Voiced by: Dave Fennoy

The last of the Audito, Sapientia represents the Cardinal Virtue of Prudence and the element of Water. He appears with Jeanne during her second confrontation with Bayonetta and challenges the Umbra Witch almost immediately afterwards. He acts as the main villain's second in command, and displays a none-too-subtle contempt for humanity. His appearance somewhat resembles a cross between an alligator and a panther.

According to the Hierarchy of Laguna, Sapientia is a narcissist who treats the rising and falling of the tides as an expression of the divine will despite the fact that he's the one doing it. He is also said to be the one who split the seas for Moses during the Exodus. 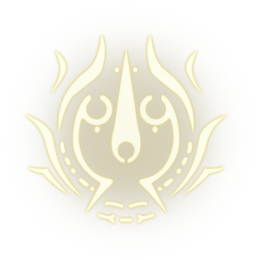 First Sphere Halo
Third highest-ranking and most powerful angels of the Hierarchy of Laguna.

In General
Highest-ranking and strongest angels of the First Sphere.
Joy

Humanoid, feminine angels that can shape-shift as a result of ascending past their physical form. They fight by forming weapons that mimic some of Bayonetta's own.
Gracious & Glorious

Stronger versions of Grace and Glory, with humanoid faces, a black and white color scheme, and a complete immunity to getting Witch Time off of their attacks.
Glamor 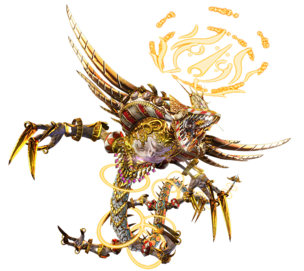 "Sovereign one. You must flee no more. Accompany me. The Prophetic one is waiting."
- Glamor
Voiced by: Tara Platt

A Seraphim seen in Bayonetta 2, it is a massive dragon-like angel that is antagonizing Loki for some reason.

In General
Second highest-ranking and strongest angels of the First Sphere.
Braves

A Cherubim in the form of an enchanted sword. 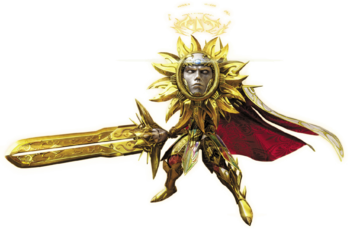 "Sovereign one, you shall not be allowed to reach Fimbulventr!"
- Valor
Voiced by: Fred Tatasciore

A Cherubim and appearing in Bayonetta 2, he, like Glamor, also chases after Loki.

In General
Lowest-ranking and weakest angels of the First Sphere.
Inspired 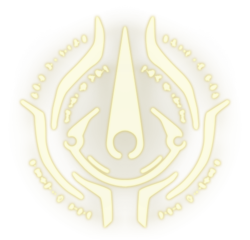 Second Sphere Halo
Second lowest-ranking and weakest angels of the Hierarchy of Laguna.

In General
Highest-ranking and strongest angels of the Second Sphere.
Fearless

In General
Second highest-ranking and strongest angels of the Second Sphere.
Fairness

A fire and lightning duo of angels that fight with large claws.
Urbane

In General
Lowest-ranking and weakest angels of the Second Sphere.
Beloved

In General
Lowest-ranking and weakest angels of the Hierarchy of Laguna. 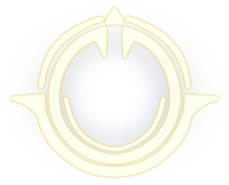 In General
Highest-ranking and strongest angels of the Third Sphere.
Ardor

In General
Second highest-ranking and strongest angels of the Third Sphere.
Applaud

Stronger versions of Affinities, they are usually accompanied by their lesser brethren.
Accolade

In General
Lowest-ranking and weakest angels of the Third Sphere.
Affinity

Simple bird-like angels that serves as Paradiso's basic infantry. Weak and gullible, they are nevertheless able to pose a threat when encountered in large numbers.
Cachet & Compassion