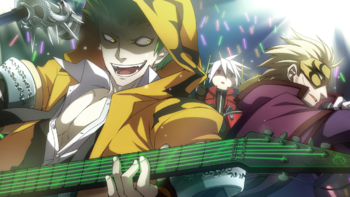 Epic Rocking Intensifies!
As a Spiritual Successor to Guilty Gear, BlazBlue has no right to not to have AWESOME music. All hail Daisuke Ishiwatari.
Advertisement:
open/close all folders
Character Themes
VS. Themes
Other
And did we mention that we just listed the whole soundtrack?