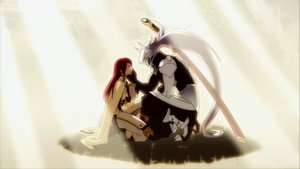 He'd burn the world in the name of justice, but he'd do even more for her.
Even if BlazBlue is set in a cynical Crapsack World, there are some amazing moments of idealism, kindness and love that are guaranteed to warm your heart.
Advertisement:

open/close all folders
Ragna the Bloodedge
Yes, you read it right. No, you don't need to get your eyes checked (yet). Even the so-called "Grim Reaper", Ragna the Bloodedge, has his share of nice moments. He may be a world-infamous criminal with an Artifact of Doom, but he's got a softer side.
Litchi Faye-Ling
Litchi Faye-Ling may be working for the bad guys over at NOL now, but even if that was the case, she still is a kindly, motherly woman with a big heart (who is just unfortunately Forced into Evil rather than going on willingly). Here are some of her actions that will melt your heart.
Tsubaki Yayoi

As the Morality Pet for both Jin and Hakumen, as well as a potential Love Interest for the former, the red-headed Valkyrie has her share of heartwarmers. Again, eventual allegiance with the Imperator and uber jealousy with Noel be damned.

And then there's- Hold on a sec! Tao has her heartwar... warm... nice moments, too, ya know? Keep looking down for more info, meow!