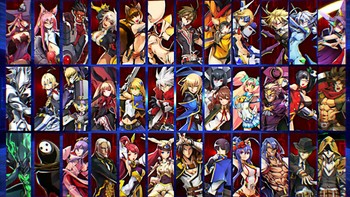 They may also contain unmarked spoilers. You may wish to finish all four games' story modes before reading.

Warning: Some artworks that are linked here (Canon or Fanon) may be NSFW. Some also contain Spoilers.

Due to length and the Troperiffic nature of the series, has been split into subpages, many of them character-specific: