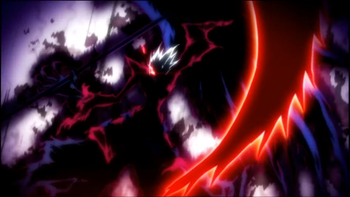 Astral Heats
Astral Heats are ultra-powerful attacks available to the cast that allow them to instantly end a fight. The restrictions are steep - 100.00 Heat, a Burst Node (Continuum Shift only), the target must be in the red (<20% stamina in Calamity Trigger, <35% stamina afterwards), and only on your match round - but the sheer graphical display makes connecting them, especially the following, worthwhile. Note that any attack with a damage value listed is the base damage - the target survives all but the last blow with 1 HP, which is noted on the finishing strike.
Advertisement:

For all the treatment Ragna gets throughout the story, he shows just how capable he is at kicking ass and taking names throughout the True Ending. Heartwarming also ensues.

Novis Orbis Librarium - The Knights of the Blue Flame

Noel Vermillion - "Successor of the Azure", aka Mu-12 - "Sword of the Godslayer"

Yuuki Terumi, aka Hazama - "The Dark Serpent" aka Takehaya Susanoo, the "God of Destruction"
Valkenhayn R. Hellsing - "The Silver Wolf"
Trinity Glassfille - "The Platinum Alchemist"
Jubei - "The Strongest Being Alive"
Nine - "The Great Magister", aka "The Phantom of Vengeance"
Sector Seven - The Power of Science

Kokonoe - "Daughter of Strongest and Greatest"

Makoto Nanaya - "Ratatosk"
While Makoto is more augged than Bang, being a squirrel beastkin, there is still much that is unknown about her. And yet, as her relevance to events increases, so too does her popularity (unfortunately, there is always an antimatter). The following list of deeds show that Izanami, Terumi and Relius' game of destiny was never the same once she hit the board.
Azrael - "The Mad Dog"
Advertisement:
Kagutsuchi Vigilates - Unsanctioned Justice
Bang Shishigami - "The Pride of Ikaruga"
Bang Shishigami is the least augged person in BlazBlue history, bar none. He makes up for it by being Weak, but Skilled, utilizing the fullest of his ninjitsu training to engage, trap, and overcome his opponents. His endurance is nigh-unrivaled, surviving the worst the rest of the cast can throw at him, and even Hakumen - the Hero Antagonist who exemplifies Good Is Not Nice - speaks very highly of his undying spirit.
Carl Clover - "The Prodigal Vigilante"
Taokaka - "The Defender of Kaka Village"
Neutral/Other - Unsung Heroes
Rachel Alucard - "The Scarlet Onlooker"
Litchi Faye Ling - "The Good Doctor"

Litchi: It doesn't matter who you are... there's a mission which I need to complete. I will never give up... ever.

Amane Nishiki - "The Uzume"
Naoto Kurogane - "Eye of the Hunter"