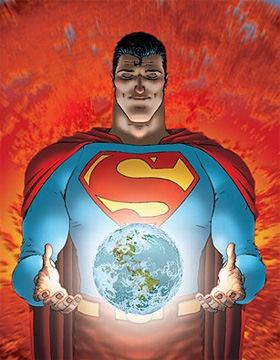 You should trust him. After all... he's Superman.
"You're much stronger than you think you are."
— Superman
Advertisement:

One of the two titles in the All-Star DC Comics line, and by far the most successful and acclaimed between them. Grant Morrison's 12-issue limited series touches on nearly every corner of the Superman mythos as it tells the story of Superman's final days.

When Lex Luthor finally manages to poison the Man of Tomorrow with an overdose of solar radiation, Superman decides it's time to look back and wrap up his life. There are villains to overcome, answers for the woman he loves, and the Twelve Challenges of Superman to perform, but Lex is still planning something and there is a villain hiding just out of sight...

An Animated Adaptation written by Dwayne McDuffie, All-Star Superman, was released on Feb. 22, 2011 - the day after McDuffie's death.