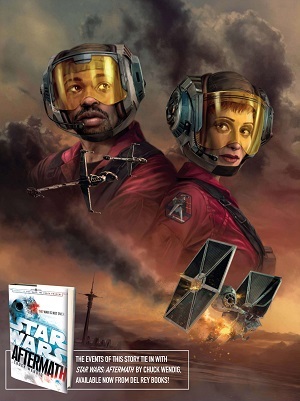 "Blade Squadron: Zero Hour" is a Short Story written by David J. Williams and Mark S. Williams with art by Chris Trevas set in the Star Wars universe. It is a sequel to the first "Blade Squadron" story and serves as a tie-in to Aftermath. It was released on September 8, 2015 in Star Wars Insider #160.
Advertisement:

Following the Battle of Endor, Blade Squadron's roster is left depleted. With Braylen Stramm now in command, he and Gina Moonsong begin the process of rebuilding the squadron before the Battle of Malastare while navigating their own personal relationship.