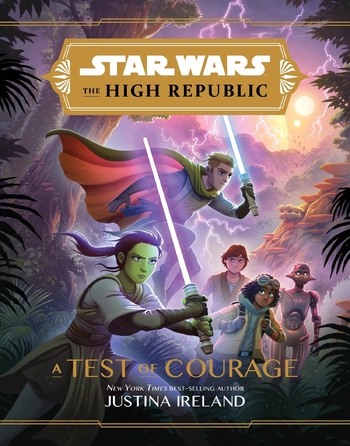 Star Wars: A Test of Courage is a Star Wars: The High Republic junior novel written by Justina Ireland (Lando's Luck, Spark of the Resistance).

Vernestra Rwoh is the youngest Jedi Knight ever at the age of 15, and her first mission as a newly minted is to escort the daughter of a senator, Avon Starros, and the son of an ambassador, Honesty Weft, aboard the cruiser Steady Wing to the opening of the brand new station, Starlight Beacon. However, when the Great Disaster strikes, the escapees find themselves stranded on a remote jungle moon.