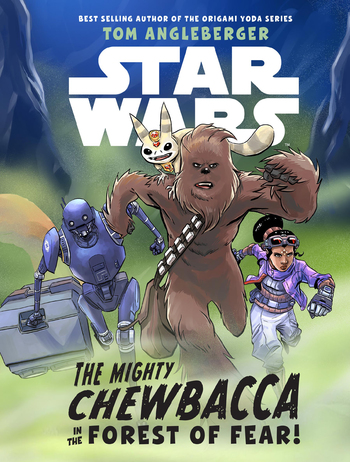 The Mighty Chewbacca in the Forest of Fear! is a middle grade Star Wars Expanded Universe book, written by Tom Angleberger (Origami Yoda, From a Certain Point of View).

After the events of Solo, when Chewbacca finds out that a job he thought was just ferrying tooka cats is actually much more, he's excited to have something to do! But when he, a young bounty hunter and librarian named Mayv Trillick, and a droll cargo droid — who, unbeknownst to the others is rebel spy droid K-2SO — land in the middle of a blue forest that emits a fear-causing mist, Chewie realizes the job may be too dangerous for his liking. He and his companions will have to fight off snarlers, sniffers, and their own fears as they try to recover a sacred book—and rescue Han Solo in the process!