Literature / Star Wars: Into the Dark 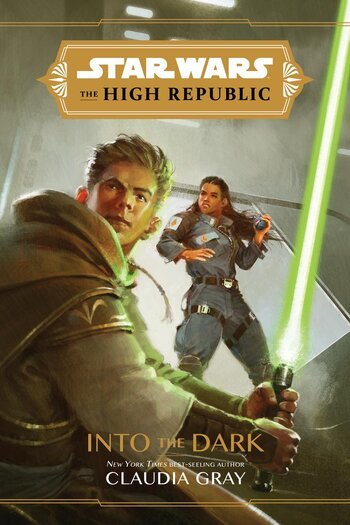 Star Wars: Into the Dark is a Star Wars: The High Republic novel written by Claudia Gray.

Reath Silas is the proud apprentice of Jedi Master Jora Malli, and is more than happy to spend the rest of his life on Coruscant, splitting his time between important missions across the planet and research in the Jedi Archives. But with the construction of the Starlight Beacon, Master Jora has been tasked with leading the Jedi Temple on the station, which will require her Padawan join her. Despite his protests, Reath travels to the Beacon in the company of Jora's old apprentice Dez Rydan, Jedi Wayseeker Orla Jareni, and several frontier cargo haulers who have never even heard of the Jedi.

On their way to the Beacon, the Great Disaster strikes, and everything changes. Reath and his party find themselves trapped on an ancient space station filled with secrets, as well as panicked refugees and stranded pirates. And there is something wrong with the station itself... a Dark Side power that the Jedi can feel, but cannot find.