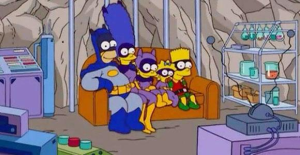 Bart Family Crossover
The Simpsons is the Trope Namer for the Couch Gag trope, where the original opening sequence had several couch gags. Sometimes they just skip straight to the driveway and do the couch gag, or some other abridged opening:

Other gags are used occasionally during the ending credits:

The song or sound played during the credits may vary based on the theme of the preceding episode:

For some episodes, the entire opening is changed:

Sometimes the writers enjoy meta-humor about the blackboard gags:

Guest Couch Gags
Other Couch Gags of Note
This could take a while ... maybe enough for a chorus line!