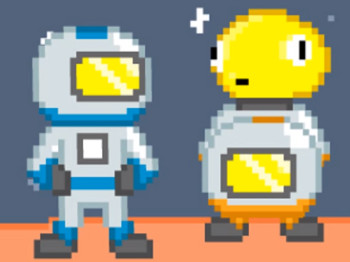 The spacemen in episode 4: "Xenophobia"
A pixel art Web Animation series starring Sips and Sjin of the Yogscast and animated by Balbod. Two unnamed spacemen: a human-hating alien in an orange spacesuit (Sjin) and his human best friend have misadventures as they drift through space.
Advertisement: