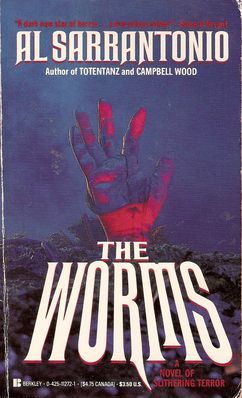 The Worms is a horror novel written by Al Sarrantonio. It's an odd, goofy, slightly meandering story concerning the town of Province. It begins in Colonial times (1693 to be precise), wherein the Brind family are accused of witchcraft by the town's magistrates, who want the family's land. As it turns out, the family's matriarch, Granny Brind, actually is a witch (of a sort), and she summons up a whole mess of giant worms.
Advertisement:

Despite this, the townspeople corral the giant invertebrates and imprison them in a metal coffin before turning their attention on the Brinds, who they burn at the stake. Only young Peter Brind escapes, and swears revenge.

Flash-forward to what would've been the present day at the time the novel was written (1988). Felicity Cramer returns to Province with her boyfriend Paul to see her parents and brother just as technicians at the Corchoran Waste Site unearth the metal coffin containing the giant worms, which begin going on a rampage throughout town, their stings causing their victims to transform into giant worms themselves. Felicity, Paul and the Cramers' neighbor Bill Gable fight for survival as Province becomes overrun with the hideous worms.