Web Video / The Ballad Of The N Word 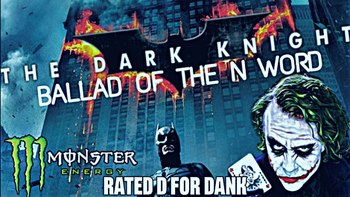 The Dark Knight is not the way you remembered it.
"You either die a gamer, or live long enough to see yourself become a furry."
— Harvey Dent
Advertisement:

The Ballad Of The N-Word

is a piece of media that is not easily described with words. Created by the mad genius named Liam Bilsky

, this cinematic amalgamation of The Dark Knight and absurd yet appealing memes of bad quality is a form of an ironic love letter to the short-lived, but memorable era of the Gang Weed culture. The Ballad of The N-Word is centered around the antics of the nefarious gamer and anarchist known as The Pranker, as Batman tries to stop him from destroying Gotham by uttering the N-Word.

I used to think my life was a YouTube video, but now I realise it's a TV Tropes page