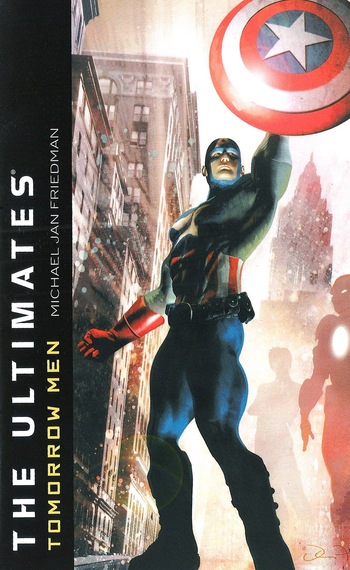 Kickin' ass even in novels.
"The Ultimates: Tomorrow Men" is a novel by Michael Jan Friedman, starring the comic book characters The Ultimates. It was written as a sequel to the first miniseries, The Ultimates (2002).
Advertisement:

The Ultimates are called when a group of powerful intruders suddenly show up at the Triskelion, and say that they come from the future. They have deep knowledge of several things about them, but the Ultimates doubt them, pointing that all such information could have been found elsewhere. Eventually, they make a leap of faith and accept them on their word. They explain that in the future the world lives under a tyranny, and that they need to take down the bases of the shadow organization called Tiber. Iron Man is later displaced to the future, and the Ultimates realize that there is something fishy about the Tomorrow Men.