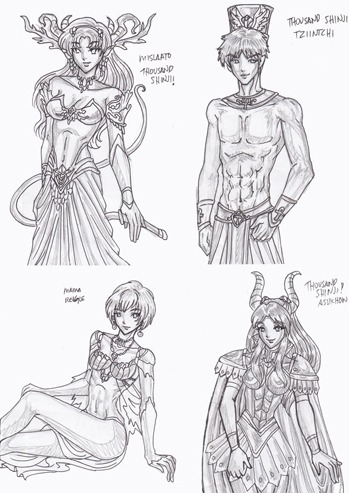 Not quite like you know them.
Art by Justinedarkchylde

His name was Shinji Ikari, and he was a quiet, unassuming young man, who kept to himself, seemingly uninterested in the affairs of the world and the people in it around him. He often seemed to lack a spine, and would bend to the whims of anyone more powerful than he, lacking any self confidence or respect. He simply existed, ignorant of others, and they in turn ignorant of him.
It was a lie.
Advertisement:

In this reality, Warhammer 40,000 as a universe exists. Shinji was found as a young boy and trained by Khnemu, a displaced Sorcerer of the Thousand Sons Legion, and learns the ways of plotting and scheming, along with a few other useful skills.

When summoned by Gendo to Tokyo-3, Shinji begins his own machinations to repay Gendo for his "kindness". Step by step he earns Misato's loyalty, Rei's affection and Asuka's love, turns the latter two into powerful allies and converts them to Chaos, training them to use their newfound powers, at the same that he slays Angels in spectacularly gruesome ways.

And then, right when it looks like if nothing can stop him, things go awry.

After completing the fic, Academia Nut wrote an uncanonical -and highly controversial and flammable- Mega Crossover side-story that never got finished. A while after he wrote still another non-canonical side-story using -an awfully out-ot-character- post-TS Shinji, but it became a Dead Fic after two chapters.

Compare with Once More with Feeling, Shinji And Warhammer 40 K (another Warhammer 40,000 Crossover featuring a very different Shinji) and Children of an Elder God, that uses similar themes (the Children becoming more than human due to the action Eldritch Abominations and picking up powers as they kill things), but merging the Eva universe with the Cthulhu Mythos. Academia Nut has stated that "Thousand Shinji" is the lovechild of those three fics.

Go to Gods, Angels, and Kings, Last Child of Krypton and Superwomen of Eva 2: Lone Heir of Krypton to see more Eva crossovers. Check Advice and Trust, The Child of Love, Evangelion 303, Higher Learning, The Ikaris, Nobody Dies, The One I Love Is..., Fading Into The Stolen Light, or Mobile Fighter Evangelion to see other AU Eva fics. Check A Crown of Stars, HERZ, Neon Genesis Evangelion R, Scar Tissue, Walking in the Shadow of Dreams and Neon Genesis Evangelion: Genocide to see other Eva continuation fics. Check Doing It Right This Time, RE-TAKE, The Second Try to see Peggy Sue Eva stories.

open/close all folders
A-C
D-F
G-I
J-L
M-O
P-R
S-U
V-Z
"Misato-san, the mother I missed during my childhood, for all her terribly human flaws. Rei-san, the sister I never had, as much as she can annoy me at times. And you, the girl who I never knew I wanted to steal my heart. If anything ill were to ever happen to any of you, it would be bad," Shinji says with a smile.
"How bad?" Asuka asks.
"Ah, so its more pillow talk you want now, is it? Well, first I would find those responsible and I would begin by… oh, let's say cutting their Achilles tendons so they can't get away. Then would begin the slow, methodical removal of limbs, inch by inch, each new wound being cauterized to avoid death by blood loss. By the end they would be skinless heads attached to torsos, eyes gouged out, noses cut off, tongues yanked free of mouths, lips sewn shut with rusty ten gauge wire, and tubes inserted to keep them alive and in pain. I would then probably conquer the world, or at least a large chunk of it, so as to build a suitably grand tribute to the loss, probably a pyramid to embarrass the ones in Egypt, only made out of the bodies of my enemies coated in resin to prevent decay and give better structural stability. This of course would be occurring while I try everything to undo the damage," Shinji describes vividly.
Shivering in a mix of fear and pleasure, Asuka says, "Sweet talker."