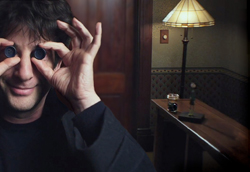 "What is there to be scared of about buttons?"
Advertisement: