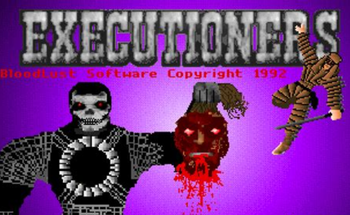 Executioners is a DOS game made by Ethan Petty and Icer Addis of Bloodlust Software in 1992. This was their first game, and it did sell relatively well at that time.
Advertisement:

Psycho Ed, no, Cannibal Ed Bujone has come up with Atomic Food Products, which is mutating unfortunate souls into monsters. But never fear, the government has a program of professional killers named Reaper and Guillotine. These two will swoop down to save the day!