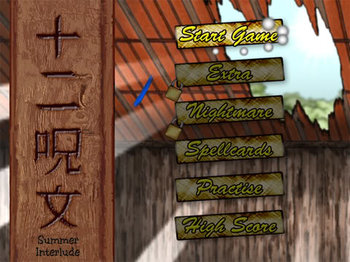 Juuni Jumon (十二 呪文, meaning Twelve Spells after the 12 main girls) is a story created by puremrz. It's about a the daily life of sixteen students in a Magical Land where magic is just a convenience.

It was later adapted into a vertical danmaku shooting game in 2011. Although it takes inspiration from Touhou, the game is technically not fan game towards Touhou and that it's set in a separate world which features an entirely new cast of characters, therefore having its own canonicity.