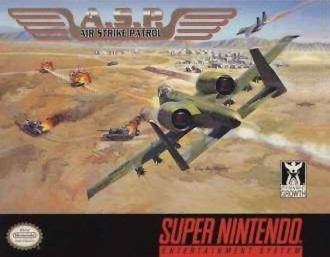 A fairly obscure Isometric Shoot 'Em Up / Simulation Game (in the same vein as the Strike series), A.S.P. Air Strike Patrol (known in Europe as Desert Fighter) was produced in 1995 by SETA Corporation for the Super Nintendo Entertainment System.

The game itself takes place during a thinly-veiled Gulf War. A Middle Eastern country, Zarak, is invading its smaller neighbor Sweit. In early 1990, the P.D.F. launches Operation Desert Corrado, with the aim of stopping the Zarak military's advance. As part of the Air Strike Patrol, you fly either F-15E Strike Eagles or A-10 Thunderbolt IIs in support of the Coalition.

What's really notable about Air Strike Patrol is that you're not simply tasked with going out there and completing your missions; you also have to do it while managing public opinion and without being wasteful of weapons, fuel, and aircraft. Three different gauges measure how effective and aggressive you are in destroying enemy units and targets, how good you are at managing supplies, and how well the Coalition's actions are received by the rest of the world—all of which rides on your actions. This adds a whole new layer of complexity in the game, by giving players a taste of what it's like when soldiers and commanders are put in this very same position.

This game received an equally obscure Spiritual Sequel in Nintendo 64 called Chopper Attack (Wild Choppers in Japan), however, it was a pure Actionized Sequel with the game instead taking place in a Banana Republic, none of the logistics operations present in this game, and player now piloting one of many types of attack helicopter.