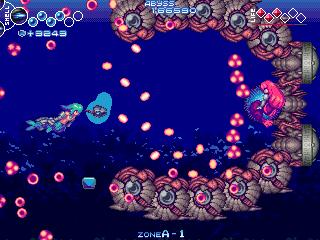 Vacant Ark is a dark and atmospheric indie Bullet Hell Shoot 'em Up developed by Buster, available as the third game here

. It takes a bit of inspiration from the R-Type series but is quite novel in itself. Ammunition is required for any attack besides a weak close-range attack, but you can get this ammunition by blocking enemy bullets with something akin to R-Type's force device.

An oceanic planet is discovered. Scientists on Earth create a cyborg mermaid and have a little girl remotely pilot it, in order to explore the planet. It turns out that a good deal of the life in the ocean is hostile.

"Return to Earth. You are not invited to here..."