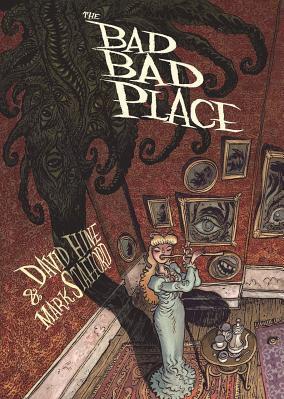 A 2019 graphic novel created by David Hine and Mark Stafford, The Bad Bad Place is set in the small town of Faraway Hills, a relatively new community built on the site of a much older village, the long-abandoned Crouch Heath. By all accounts, it's a great place to live: a low crime rate, excellent schools and even a reputation for great shops.

Alas, it seems as if Faraway Hills has gone the same way as its predecessor, for when main character Jenny arrives on the scene, she finds it completely deserted... except for the elderly town crier, Ned Trench. From what little the old crier is willing to tell her, the trouble started on the day the long-vanished Castavette Estate reappeared in Faraway Hills - years after its apparent demolition. A plague of disappearances and bizarre supernatural activity followed it into town, along with a number of mysterious residents that eagerly invited people inside the Estate but never once left it.

And as the conversation goes on, it soon becomes clear that both Ned and Jenny are more entwined with the Castavette Estate than they'd like to admit...