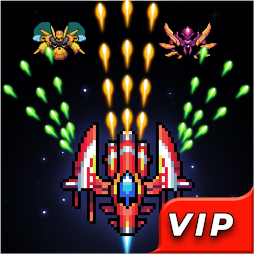 Falcon Squad is a Shoot 'em Up for smartphones by Onesoft released in 2017. In it, you play as a spaceship and shoot down formations of enemies while dodging their attacks. You can upgrade your ship and equip different weapons in up to three weapon slots. There are also boss fights.