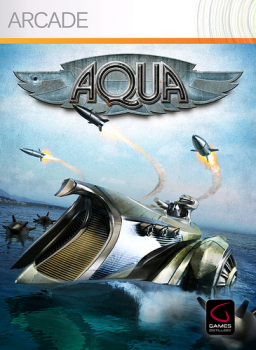 You don't become a war hero by running off blindly. You wait for a window of opportunity. - Captain Grey

Aqua, also known as Aqua — Naval Warfare and just Naval Warfare on Steam, is a straightforward twin-stick Shoot 'Em Up developed by Games Distillery of Bratislava, Slovakia. It was published by Microsoft for Xbox LIVE Arcade on May 19, 2010, and later by Just a Game GmbH for Steam on May 25, 2011.

It's an Alternate Universe where much (which is to say, even more) of the world's surface is covered by water. This world is in the throes of an industrial age, though one with more advanced tech and flamboyant aesthetics. Great sea battles between ironclad warships are the order of the day. There are several principal world powers in play, such as the Emperreans, the Gotheans and the Samureans. As the game begins, a war has just concluded between the Emperreans and the Samureans, with the former as the victors and about to throw a celebratory parade.

The player assumes the role of Emperrean steam-cruiser Captain Benjamin Grey, a snarky Officer and a Gentleman. Together with perky Chief Engineer Polly Edison and assorted crew, Grey uses his small, but fast and heavily-armed warship to put the hurt on the bad guys.

In addition to the story-driven campaign, the player can engage in one-shot quick battles or races either alone or with a friend in local co-op.