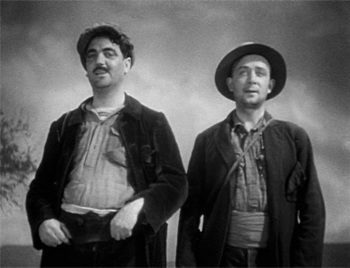 À nous la liberté ("Freedom For Us") is a 1931 film from France directed by Rene Clair.

Two petty criminals and best friends, Louis and Emile, are serving time in prison together. They make a jailbreak one night, sawing through the bars of their cell, but Emile cuts his hand in the process. As a result only Louis is successful, scaling the walls with a rope, while Emile is captured by the guards.

Louis makes his way to freedom. He starts selling record players in the market, which turns into him owning his own record store, which turns into Louis being a captain of industry owning a phonograph factory. Meanwhile, Emile is eventually paroled, and then re-imprisoned, and then through some wacky events winds up working at Louis's factory.

Some of the gags in this movie, especially the scene on the assembly line where the workers fall behind, were similar enough to Modern Times for the producers to sue; Charlie Chaplin settled out-of-court.