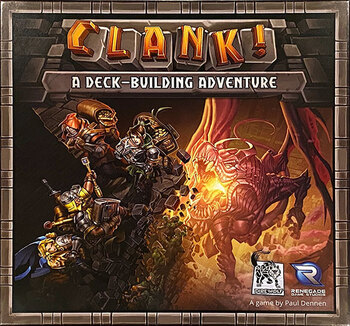 The base game's box art.
Advertisement:

Clank! A Deck-building Adventure is a Deckbuilding Game that combines deckbuilding with more traditional Adventure Board Games.

The game's premise consists of two to four players acting as thieves attempting to plunder a dragon's castle of treasure. The most important treasures of them all being the Artifacts, of which you can only carry one. The game ends when the players all successfully escape with their Artifacts or die trying.

Gameplay involves moving around the board with to grab an Artifacts, as well as Major and Minor Secrets along the way, by moving their game peice into the room they are in. Each turn, they may also Acquire cards to both use immediately and add to their personal deck from both the Reserve pile(cards which are always available) and the Dungeon Row (cards which are dealt from the Dungeon Deck and represent monsters to face, items to steal, potential companions to persuade to your side, etc. that your character finds along their journey). Moving around is primarily done with Boots icons that are found in the cards of your deck, while Acquiring cards is done with cards that give the player Skill (for everything but monsters) as well as Swords (for monsters). Players begin with a 10 card starting deck of six Burgle cards worth 1 skill each, 1 Sidestep card worth 1 Boot, 1 Scramble card worth 1 skill and 1 Boot, and 2 Stumble cards, which gives the player Clank.

In addition to these three primary resources to manage, the player must be careful not to build up Clank, representing the noise the player would make as they move about the castle, alerting the dragon to their presence. Clank is represented by colored cubes that eventually get put in a bag, shaken, and drawn. If the dragon successfully detects a player (which happens whenever the player's cube is drawn), the player is dealt damage that will eventually result in defeat. The goal of the game is the acquire one artifact and as much loot as they can and successfully escape. The winner at the end of the game is a combination of Victory points on cards, secrets, the player's artifact, and any acquired gold.

The base game has 5 expansions:

In addition, there are 2 related games.

This deckbuilding game provides examples of:

Clank! In! Space! Provides examples of: