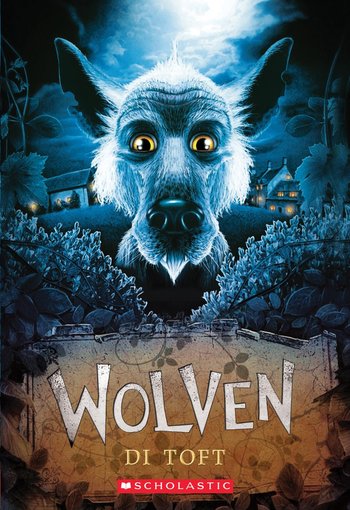 Wolven is a trilogy of middle-grade novels by Di Toft.

Family circumstances force twelve-year-old Nat Carver and his mother to temporarily live with his grandparents in Temple Gurney, a small village in the English countryside. While there he adopts a large, ugly dog named Woody—-who transforms into a boy a few days later. Woody is a Wolven, a sort of reverse werewolf who escaped from a science lab as a puppy. Unfortunately the villains at the lab are still looking for him, including the mutated werewolf Lucas Scale. While killed, Scale bites Nat and possibly infects him with lycanthropy.

The second book, The Twilight Circus, sees Nat and Woody in France, where Nat’s father and grandfather run a circus full of supernatural creatures. Unfortunately the circus is spending its winter off-season in a town being attacked by vampires, who are in league with the resurrected Lucas Scale. Helping out is Alex Fish, a young agent from a Creature-Hunter Organization that wants to recruit Nat and Woody. Woody also hopes to find the remains of his Wolven clan living in the area.

The final book, Bad Wolf Rising, has the boys return to Temple Gurney, where Lucas Scale has started kidnapping local boys to form a pack of brainwashed werewolf servants. Working with a demon, Scale is trying to find the Baphomet Head, an Artifact of Doom that could kickstart the Apocalypse.