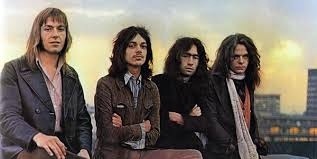 Left to right: Simon Kirke, Andy Fraser, Paul Rodgers, Paul Kossoff.
There she stood, in the street, smiling from her head to her feet,
I said hey, what is this, Now baby maybe she's in need of a kiss,
I said hey, what's your name baby, maybe we can see things the same?,
Now don't you wait or hesitate, let's move before they raise the parking rate!
"All Right Now"
Advertisement:

Active in the British blues movement during The '60s and The '70s, Free was an English rock group formed by Paul Rodgers (lead vocal), Paul Kossoff (lead guitar), Andy Fraser (bass guitar) and Simon Kirke (drums, percussion). Given the name "Free" by the London blues scene mastermind Alexis Korner, they quickly became leading exponents of Blues Rock known for their top-class musicianship despite their youth.

While the band were slow to take off, they attained worldwide fame with their third album, Fire and Water, which featured the massive hit "All Right Now". Noted for its distinctive guitar riff and bassline, this song broke the band in America and has remained a staple of Classic Rock radio for close to 40 years.

Although Free were relatively short lived, their influence on subsequent rock bands was considerable. Rodgers and Kirke subsequently formed a new group with Mott the Hoople guitarist Mick Ralphs and King Crimson bassist Boz Burrell. This group, of course, was Bad Company, who became very successful in The '70s.