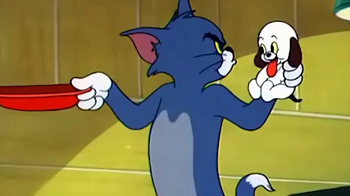 Puppy Tale is a 1954 Tom and Jerry cartoon directed by Hanna-Barbera.

One night, Jerry sees a motorcar throw a bag into the river. After fishing it out, he finds it is full of puppies. When one of the pups takes to him, Jerry decides to bring it home. Unfortunately, it's too big to fit through his mouse hole, so Jerry has to sneak the puppy through the front door. This proves to be difficult as Jerry is forced to keep Tom from noticing the puppy, which is further complicated when the pup gets into Tom's milk and bed.