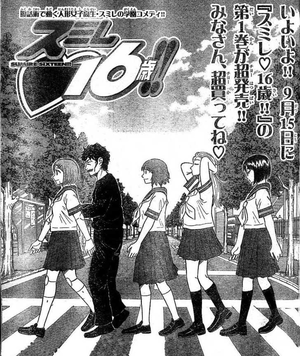 A manga by Nagayoshi Takeru that takes quite a different spin on the usual high school comedy manga. Originally published as Sumire 17 sai!!, an 18 chapter series running in Weekly Shonen Magazine in 2006, it gathered enough popularity to be expanded into a 52 chapter comic in Magazine Special under the new name Sumire 16 sai!!. The new series ran between 2006 and 2008, and was adapted into a 12-episode live-action JDrama TV series.

Ordinary schoolgirl Renge Ohyama is on her way to the first day of high school when her bike breaks down. A mysterious schoolgirl named Sumire Yotsuya offers to help her... but is she really just a schoolgirl? Who is the weird old man using ventriloquism and controlling the puppet? Wait, Sumire is a life-size puppet!?

Don't let the creepy old man scare you away from this buried treasure!